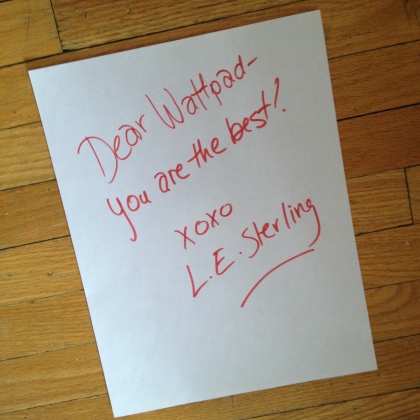 As I sat in this hotel room, speaking to no one and going to bed at absurdly early hours and sleeping for twelve hours straight, I realized what it was I was doing there. I was at a crossroads. I was seriously contemplating giving up writing forever.

It’s impossible for me to convey the enormity of this statement to someone who doesn’t know me well. I’ve been writing my whole life. I had my first professional magazine credit when I was in grade three (a piece on the Olympics), had written my first novel when I was eleven (a dystopian fantasy, nonetheless). I took creative writing all through high school and university. I published poetry, fiction, non-fiction. I landed my first publishing deal for The Originals when I was 27.

My entire life’s mission has been about writing. And I was thinking of giving up on it entirely.

You see, even though I’d published two novels, I’d been penning novel after novel and getting nowhere. I also had a full-time job and was about to start an even bigger job. I had bills to pay, a small child to raise on my own. But more than being cramped for time, endless rejection and a lack of readers was turning me cold.

I posted True Born as a novella on your site on the advice of a work friend. I only meant True Born to help me develop a back story for another arc of novels I was intending to write, also set in Dominion city (I might still get around to these, someday). It was an experiment – meant to help me get out of a rut.

Instead, it brought me someplace else.

Ailsing Oconnor, a Wattpad reader/creator, and one of 20,000 people who accessed True Born on the first week of its release, sent me this note:

It’s not often that you find a book that draws you in completely to the world the author has created. It’s nearly impossible to do this in such a short amount of pages. Yet, you have succeeded with True Born. It’s a fascinating world, with such a unique concept of survival. Personally, I think that it should be published  as a novel, I think it would do very well in stores. Thank you for writing such an intricate universe that I had the pleasure to read about.

And this, from Lady Ambrosia:

Wow….. Just wow. I found this book to today and I’m going to say that I’m the happiest girl alive today. This is so so so so so so so good!! …Your style of writing is so unique and so different from others styles that I’ve read. Its very refreshing, and I was hooked on your first chapter…  This is one of those books, that I can spend all day reading, and read over and over again, its just that darn good! … I do think that with your amazing writing style, you could take this book to many places and I would definitely love to read more. I’ll   be following to see if you update! ❤

You have to understand: I had published my second novel not so long before this, to the enticing sound of…crickets. I had no readers. I didn’t even know where to find them. Gone were the days when my esteemed small press could get away with the kind of non-marketing it had done for decades. I had no readers.

Then, almost overnight, I had +500K of them. And they all wanted to read more.

Still, despite having all those avid, curious readers, I didn’t have a book deal. My agent kept receiving rejection after rejection for the novel. I was at my wit’s end.

So I sat in my hotel room and stared at the blank screen of my laptop, playing Russian Roulette with words. Should I? Can I? What next? I wondered who I would be if I was no longer a writer, even part-time, as I have been. It left me feeling cold, barren…as though I had died.

Yet every time I opened up my laptop, another comment (or three, or forty) blinked at me as though I was crazy to even contemplate giving up. I hung there from a thread, balancing over the lives I might lead.

Just sixteen days after leaving that hotel room, I received an offer from Entangled Teen for not just True Born, but for a trilogy of novels based on these twin girls that had leaked from my imagination so accidentally.

I often think, now, about what would have happened if I hadn’t had you, Wattpad, and your legion of creative people struggling to express themselves, bold and brave and cool enough to get in touch with each other and share their delight in each other’s work. Would I have been brave enough to continue? Would I have even tried to keep going?

I recall a story a friend of mine had relayed to me after she had gone to Wattpad to interview its founders. There, in their Toronto head office, is a tree whose leafs bear the names of writers who have done well on the site. I’m told she found my name hanging there, dangling on a leaf just above Margaret Atwood’s.

6 thoughts on “A Love Letter to Wattpad”